"Knowledge is not always kind. Some of what you learn here, may have you pining for more ignorant times."

The other half of the Strigoi family are the descendants of Lizuca's childer, the Strigoi Morti. Where the Strigoi Vîi are haughty and vain, the Strigoi Morti are secretive and alien. Able to shed the physical deformity of their Nosferatu cousins, they are no less hated and feared by others. Thusly many have discarded their humanity and seek to embody something ... more. Creeps often appear monstrous out of choice rather than circumstance.

Strigoi Morti took upon themselves the inheritance of Lizuca and study the mysteries of the second world. Modern Strigoi Morti still serve the caretakers of the founder, long after his/her descent into torpor. The caretakers rule by council, called the Diet of Cluj, where elders are advised by sorcerers called Kolduns, most of which are Strigoi Morti. In modern nights the Diet has been mostly become a formal bickering session, where Voivodes fight over long forgotten feuds. With the fall of the iron curtain, more Strigoi Morti have left their masters and begun to branch out and travel to lands beyond their elders' domains. 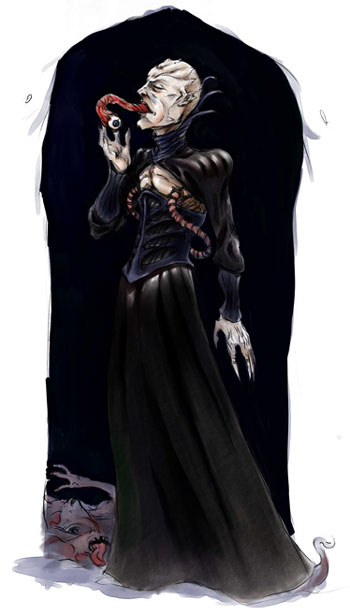 Covenant: Almost all Strigoi Morti belong to the Circle of the Crone, at least in their formative years. As many Strigoi Morti are from occult backgrounds, it usually goes hand in hand with their initiation into the Kindred society. Lizuca was a powerful acolyte in her time and developed many Cruac rituals that are kept secret by the bloodline, so it has been rumored that they enforce that secrecy if one of their flock, who has learned too much, goes astray. Those that leave the Circle early on (before learning anything "proprietary" that is) often do so to join the Ordo Dracul, whose own occult practices are enticing to scholarly Creeps. These former acolytes often become "scientists", studying the development of the vampiric form.

Appearance: Transviscera allows Strigoi Morti to appear as human as they wish, but since their clan weakness still persists many Strigoi Morti don't bother with human appearances. Instead they tend to refine their monstrous appearances into a morbidly artistic or alien semblance. They favor dark clothes that suit their morbid sense of taste, often choosing materials that do not easily get wet or stain. As any Creep will tell you with smirk, form follows function.

Haven: Introspective kindred, many Strigoi Morti live simple hermit-like existences. Some live hidden within the walls of academia and are the sources of campus ghost stories. Others convert abandoned building into labs or studies filled with books, or what ever tools they use to satiate their curiosity. What is common is that Creeps like privacy, and don't take well to gate crashers, taking special pleasure in the delivering of punative lessons.

Background: Strigoi Morti are drawn to potential childer because they have keen insight, or talent for the occult. Many look for some demonstration of "second sight" in a prospective childe. Those who are worthy may lose their talents after the embrace, but soon they develop new powers to replace it.

Weakness: Strigoi Morti have the same weakness as their Nosferatu forbearers. However much they change their visage to appear human, those that see them feel an inner sense of their monstrous forms. This aura of fear does not betray the Strigoi Morti who uses Obfuscate any more than it would any other nosferatu.

In addition Strigoi Morti suffer the same weakness as the Strigoi Vîi and cannot rest unless in contact with blood soaked earth. One vitae's worth of blood must be drained into at-least two handfuls of earth. If the Creep is unable to do so, she takes a -2 penalty to all mental dice pools for any night gone without suitable rest. Those who suffer this malediction report spasms or strange movements of their flesh as if it were coming alive. Any failed resolve or composure rolls can result in such an episode, usually lasting the rest of the scene. The character's flesh undulates, and spasms, and mutates, reducing his dexterity to 1 for length of the scene. Strigoi Morti elders theorize that this curse was left by the spirits of the Virgin and the Mother for Lizuca's treachery and that the rite of blood soaked earth wards them against it.

Retrieved from "https://worldofdarkness.fandom.com/wiki/Strigoi_Morti?oldid=4794"
Community content is available under CC-BY-SA unless otherwise noted.